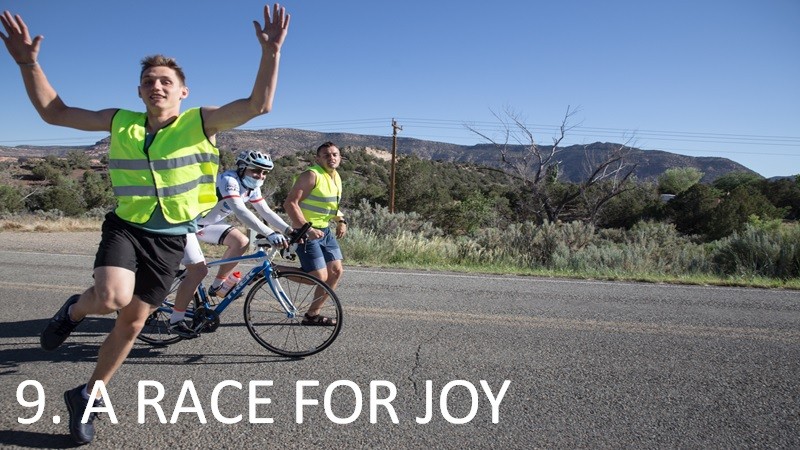 If I were to describe my RAAM experience in two words, I would use the phrase "For joy!" That's how I was cycling through the United States. My main goal was to enjoy cycling and be in a good mood. For the entire 12 days. But I didn't get it for free.

We landed in California a week before the start. My reliable crew, led by Jarek, took care of all the matters that I didn't have to deal with. There was a lot of it, and I didn't even know what they were doing.

My role has been reduced to eating, training, sleeping and resting. Right after my arrival, I was in poor mental shape. I was just worried about how the race would go. I had been training hard over the past months, but I was still concerned if it would be enough to complete the RAAM.

However, this week changed everything. I was living in a bubble. I lived like a king. Apart from the daily training on the road, I had no duties, no decisions to be made. It was not a fad. It was for something. When I left the motel room, Michał was always with me. We often went to the beach and did mental training with yoga elements. Its main goal was to get rid of negative thoughts, fear, anxiety, worry, designing negative scenarios. In return, we aroused supportive emotions: satisfaction with the work done over the years, gratitude to my family, relatives, friends, fans, sponsors and to myself for being able to be here and make my dream come true. I was learning to enjoy the surrounding nature, landscapes, the sound of the ocean and the light of the sun ...

In combination with the evening relaxation sessions, all these exercises gave an unexpectedly good effect. I felt very good mentally from the moment I started in Oceanside. I enjoyed the ride, every turn of the crank, every kilometer I traveled. I admired and fed on the views. I had the space for it, because on a long distance you can't cycle to the limit, when you only feel pain and the intensity of the effort does not allow you to concentrate on anything from the outside. I didn't have a power meter, I didn't look at the heart rate monitor. I was going according to my own feeling. At 60 percent. No more, no less.

In addition to landscapes, I also gave myself a boost with the music played by the crew through a megaphone or headphones. The repertoire included energetic rhythms, but also Balkan music (full of elation, emotions and associated with virgin mountains). However, the most interesting move was to start music for children on the longest climbs. I still remember when one night we played songs from Mr. Kleks's Academy and we overtook our rival up the hill, who was surprised to hear the melody "Welcome to our fairy tale, the elephant will play a pipe ..." and then "Fantasy, fantasy, because fantasy is from to have full fun ... ". Why music for kids? When you have such joyful, carefree sounds in your ears, there is no room for suffering even on a heavy hill.

In addition to generating joy from landscapes and music, the team also provided a good atmosphere. Of course, during the 12 days it happened that someone had a bad day and was not bursting with positive energy. Then he knew that he was forbidden to approach the cyclist. These rules were introduced by team members. They worked hard and yet managed to bring out such creative ideas for positive support as the one with constructing a kite out of a sheet form RV. Thanks to this, the strong wind that was blowing in my face all day became an ally in creating the "Wow!" effect.\ 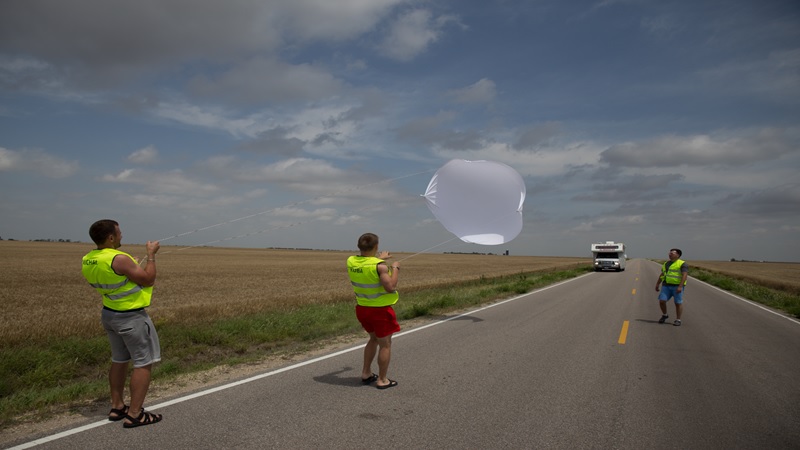 Generating joy was my constant responsibility during the race. After all, I was able to ignore limiting thoughts and create and feed supportive ones. I was able to evoke such emotions that tears flowed. I imagined going through the finish line. I enjoyed every hour, I was calm, I worked with a steady intensity, I did not strain my muscles. I was cycling sparingly but actively. In difficult times, when something hurt or tired, I slowed down a bit and waited for it to pass. When I regained my vigor, I returned to cruising pace.

Of course, the body felt the effects of a dozen or so days of cycling. My speed was slowing down a little day by day. However, at the end of the race, I felt as if I had reached the state where I could continue this effort indefinitely. If I were told to turn back at the finish line and drive another 4800 km to Oceanside, I would be convinced that I could do it.

RED BULL JOINS RACE AROUND POLAND AS A PARTNER!