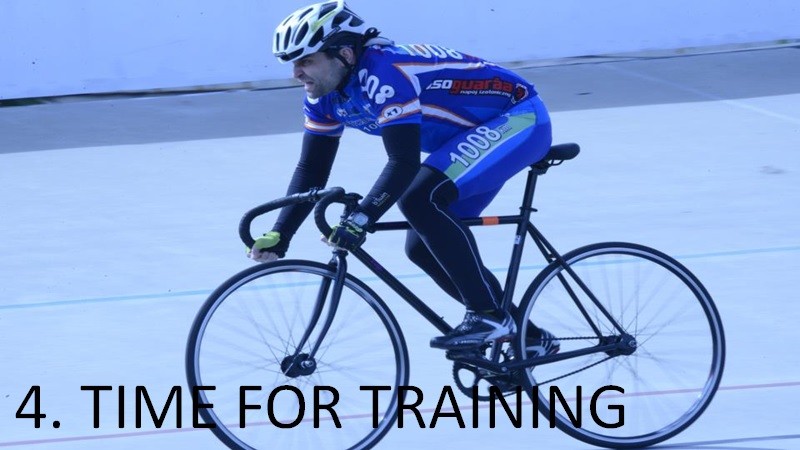 The goal is here. The plan is here. Now it's time to train!

Exactly. How do I find time to train? Full-time job, family life, commuting, etc ... And you still need to rest!

Being at the beginning of the way, I trained on average 4 hours a week. I knew it was not enough. I knew it was okay because I had a method. No matter what level I start from, it is important that there is regular progress.

My greatest training inspiration, even the guide, I used, was the "The Cyclist's Training Bible" by Joe Friel. Friel argued that the annual increase in training volume should not exceed 10-15%. However, there was a big challenge ahead of me, so I assumed that in this matter a progress of 20-30% would be appropriate. As a result, from 4 hours a week in a given year, I have to do 5 hours in the next. I should have looked for an extra hour. It was not particularly demanding ...

Of course, the extra 25% of the time was harder to find in the years that followed, but it's important to get started. Small loads are good to start with, then "speed up" in action. In subsequent periods, the action itself, the sense of effectiveness, gives strength and it is easier to "optimize yourself".

How to do it? Let's take the length of sleep into the consideration. I came to the conclusion that in the face of the challenges ahead, I would be a better racer if instead of spending 8 hours a day sleeping and 0 hours training, I would sleep for 6 hours and train for 2 hours. And that's 14 extra hours a week. It may be an individual matter and everyone has to check it herself/himself, but I noticed that for effective work I need 6 hours of sleep, and 5 hours of sleep the previous night is enough for proper training.

Another method is to parallelize the activities. Due to the fact that I did not have a trainer, I decided to borrow it from Decathlon and in return I proposed that every 2 weeks I would organize an event in the shop, promoting indoor riding, ultra races and organizing trainer competitions for customers. It was a great idea, because apart from the fact that I had the trainer for free, I had a place where I could do longer rides (it was problematic at home) and I also promoted my participations in ultracyling races, which translated into an increase in the value of the Ultrakolarz brand as perceived by sponsors.

Did I have time for my family right before important races? Yes. In the fall and winter, we were going to the gym with the whole family on weekends - I was doing my training, my wife was exercising on the machines, my son was rowing and surfing the Internet and my daughter was playing in the children's room. In spring and summer we all were cycling. I had a recovery training and we together - a nice "coffee and ice cream ride".

Have I had time for non-cycling entertainment? The cinema was rather rare, but I watched quite a lot of television spinning on the trainer. During light training - a movie, during a more demanding - cycling races at Eurosport. A book - before falling asleep, but usually a sports one, usually something about Race Across America - to boost my motivation. Besides, audiobooks during training.

To sum up: It is worth realizing that the day is no less, no more, but exactly 24 hours. We have to make good use of the time we have. Note that the week is 168h. 10h is only 6% of all the time we have. If we are following a dream, isn't that dream worth the 6% or not?