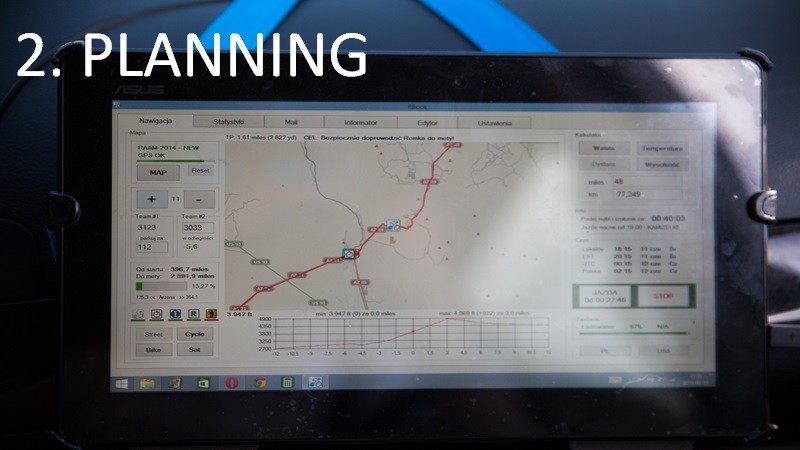 My goal was already dreamed and set. It was time to plan how to achieve it. My longest non-stop distance was 116 kilometers. From Warsaw to my hometown Tomaszów Mazowiecki. 116 vs 4800. The abyss!

On the other hand, I gave myself complete freedom as to when I would achieve my goal. I knew that if I would improve my maximum distance regularly, I would reach the RAAM distance in the finite time. I really like to plan in Excel and assume the percentage of progress in subsequent periods of time.

In the spreadsheet, I dragged the calculations onto the next rows and I got:

It looked like I would be able to finish RAAM in 2015, the 10th season of preparation. I felt excitement. Here was my dream turned into a plan. Of course, I was aware that I had a long way to go, not only in terms of physical preparation, but also in terms of fundraising and team building.

For example, I read that in order to prepare for the RAAM, you should suspend your professional work six months before the race and train 30 hours a week. Then it turned out that in my case neither one nor the other was necessary. The myth is gone. But if I was too concerned with what someone once wrote, it would destroy my dream.

I knew I had a lot of work and effort ahead of me, but on the other hand, I knew I had almost 10 years to do it! It's a long time. Someone once said and it worked for me:

I also looked at this plan of maximum distances in the following years and felt the excitement, similar to the excitement before traveling to unknown regions. It actually was. To cycle 200 or 400 kilometers for the first time is like going somewhere where I haven't been yet. How will the body react? What will I feel? I knew that there would be satisfaction with breaking my next records for sure. I already knew it...

It was necessary to color this plan by adding in the last column "races of the year", i.e. the main starts. This is how the following list was created:

An ambitious distance every year. A beautiful race of the season every year. Every year, further on the scale of long distance. Every year closer to the goal.

It might seem that the road to the big goal should be difficult and the plan - tight, almost impossible. However, this one cheered me up rather than chilled my blood. There was more to expect wonderful experiences than fear and anxiety.

This plan I roughly made. The most important change was that after RAA in 2013, I meda RAAM in 2014.

Race Around Poland a qualifying race for Race Across America!

The Race for You

HOW TO FINISH A REALLY LONG RACE? STAGE 10. EACH END IS A NEW BEGINNING.

HOW TO FINISH A REALLY LONG RACE? STAGE 9. A RACE FOR JOY.

HOW TO FINISH A REALLY LONG RACE? STAGE 8. IMPOSSIBLE TO TURN INTO POSSIBLE