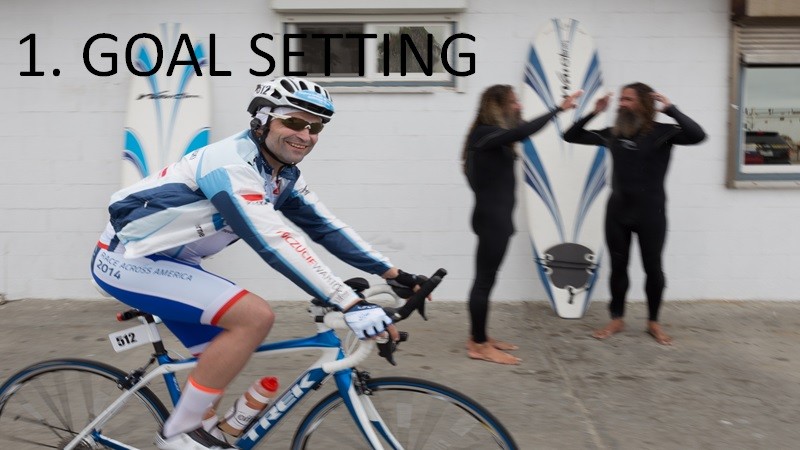 It wasn't that I found out about the Race Across America all at once and wanted to finish it right away. The passion matured gradually.

I have always liked to ride a bike. As a child, I lived in a town with 11,000 inhabitants, and the main entertainment there after school was playing football and cycling. Then, in high school, the bike was relegated to the background. You know - friends, parties ... Only summer excursions remained from physical activity to follow the Bieszczady Mountains trails.

During my time of studies the popularity of mountain bikes was growing. I remember my first MTB bike - Giant Chicago. Cycling fun! A trip to Venice with my uncle. During 4 weeks of the bikepacker journey we made almost 3,000 kilometers around Europe. It was the most wonderful vacation for me then.

(Un)fortunately I worked in a corporation and I didn't have a chance for another such a long vacation. I had to modify my interests. It was 2002. My attention was caught by the MTB marathons. I read about them in the only bicycle magazin then - "Bikeboard". This title was related to the so-called "Bikeboard League".

I was so involved in the subject that I wanted to see what a marathon like this looks like. What? Amateurs of all ages can pin a bib number, race a marked route and have their time measured? Back then it was something new!

One night I got in the car and drove from Warsaw to Bydgoszcz (300km) only to see it in the morning with my own eyes. And I saw. Women, men, older and younger, with varying speed and efficiency, overcame gravel, grass, asphalt, mud and reported to the finish line.

It was amazing! Shivers ran down my spine. I knew I wanted to follow this. I knew that I would buy a better bike, train myself and a year later I would partipate in such a marathon.
It happened. In June 2003 I started the marathon in Krakow. The shortest distance. I think 33 kilometers. Start from Błonia, then the first ascents and difficulties. At the 6th kilometer, I was already walking next to the bike and panting like a locomotive. Metallic taste in the mouth. Everyone was ahead of me, regardless of gender, weight and age. I don't remember how I made it to the finish line, but I will not forget so far that when I tried to get off my bike, I was almost knocked out by terrible cramps. I stood there for a few minutes before I could free myself. A cup from my Gosia was waiting for me for sweetness. I have it so far!

Then I made my decision. Yes, this is it. I love this make! For the next few years, we traveled all over Poland on weekends so that I could compete in the next events.

Until there was a marathon in Złoty Stok. 103km. Now such a long distance is probably a rarity at this type of event. Start in the morning. Many hours on the road. Finish in the evening. Revelation!!! I just liked it! To get tired and - on the eyelashes - to finish. Interestingly, on shorter distances (Mega) I was in better positions, but I liked the Giga much more. I didn't have any success there. The challenge was to meet the time limit for entering the second loop. I was the last to finish, but still I was happy. It happened that the organizer was already putting up a banner closing the entrance to Giga, and I was screaming from a distance: "I'm on time, please let me in!"

I wanted further and longer. However, the closest longer marathon was 1000 km from home, in Austria. It is called Saltzkammergut and is still held today. There was no such possibilities in Poland.

Then - once again following my heart, passion, chills, children's dreams or whatever else you can call it ... - I made another decision. I switch to the roadbike. There were so-called Supermarathons organized on the road. Distances of 200, 300, 400 kilometers. Cosmos!

Here, while "traveling" through the Internet, in search of even longer and longer distances, I found a website with a strange address: "1008.pl". The race was called Imagis Tour. From Świnoujście to Ustrzyki Górne. Across Poland. 1008 km. Anyone able to cross it at all? However, yes! On the website I found reports of these "madmen" and photos from the marathon. Mega! What a teaser! This is it!!! I want like that too!

From then on, I started to figure out how long it would take to prepare, how to plan it, etc. My "internal pressure" for this race was so strong that I did not hesitate for a moment whether I could make it. The question was not "if?", but "when?"

Once I found out about RAAM, my approach was similar to BBT. Chills in the back, MS Excel in motion and planning, what, how, when, for how much ...? I was a little discouraged by the thought that I have to take a team, cars ... It was not my cup of tea. I just wanted to cross the United States on the bicycle. However, there was no way out. If I wanted to achieve my goal, I had to take it on bars with all its ingredients, including those I didn't like at first.

If I am to extract the most important things from this whole story, they would be: