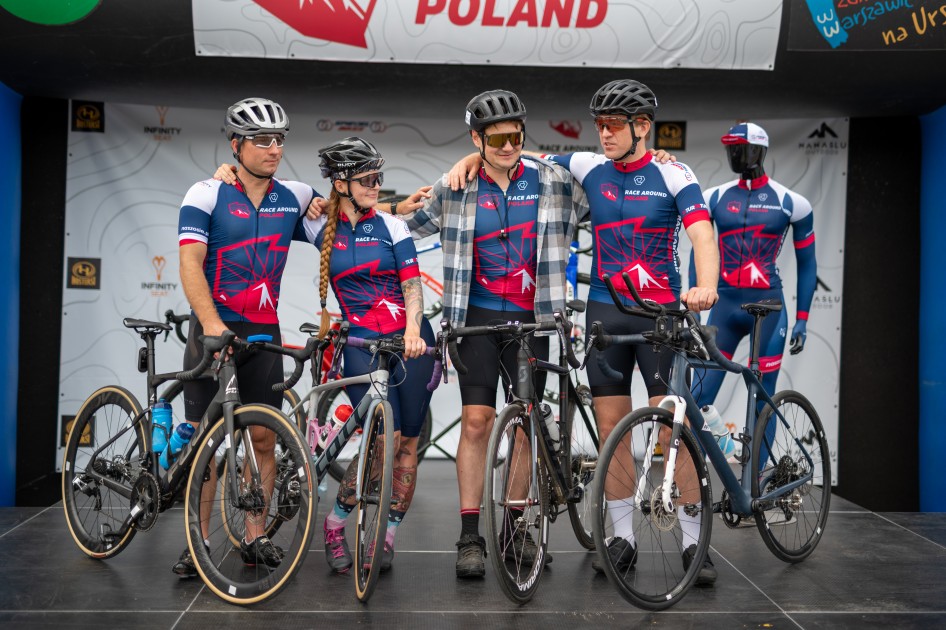 Four months have passed since the end of Race Around Poland 2022 and we already have over 60 participants from all over the world on the lists of participants for the historic 2023 edition, which will also be the World Ultracycling Championships! On the route around Poland we will see competitors from Brazil, India, USA, Switzerland, Great Britain, Ireland, Sweden as well as Serbia and Latvia. There is still a lot of time left until the end of registration, and it has only been a dozen days since the information concerning the World UltraCycling Association's awarding of the right to organise the Championships to the RAP organisers, so we are sure that this is only the beginning and the start lists of the 2023 edition will host many more participants, including many from the world's top long-distance cycling team.

Who will be the World Champion?

As we already know, in 2023 the eyes of the entire ultra cycling world will be focused on the riders competing over the full distance of the Race Around Poland 3600 km in the solo supported category, among whom the WUCA World Champions will be determined. We already have some exceptional names of outstanding athletes on the start list of the World Championships and we are already looking forward to seeing them compete for the title!

Nicole Reist - an exceptionally successful athlete from mountainous Switzerland, probably the best ultracyclist woman in the world at the moment, with a list of sporting achievements that may also amaze prominent male ultra-cyclists. The list of her sporting achievements goes on endlessly. One can mention here, for example:

Joe Barr - an Irish ultra cyclist with an impressive track record, which among other things we have already written about here. Joe is also the organiser of the 'Race Joe Barr' ultra races in Ireland and author of widely read books on ultra cycling - details at www.teamjoebarr.com . His list of career achievements includes victories in over 500 races, a bronze medal in the 1986 Commonwealth Olympics and WUCA world records in races over 500 miles and over 1000 miles. His victories include.

Giovanni Prosperi - Italian by day living in the USA. Together with Philippe May - participant of the 2022 edition of Race Around Poland, winner of Race Across America 2019 in the two-person team category. A cycling coach and bike mechanic He registered first for the 2023 edition not yet knowing that by doing so he would be taking part in the World Championships! Part of his support team will come from Poland.

Among the contenders for the World Ultracycling Championships, there is also a special person on the start list - this is Piotr Kuryło, whose name has so far not been associated with ultracycling, although he is an ultra-athlete with an impressive track record!

Piotr Kuryło is a figure whose achievements could fill many texts, so we will devote a separate article to him in the future to give more details of his profile, but in the meantime we will only mention that:

He participated four times in the Spartathlon - a real marathon run of 246 km from Athens to Sparta, and in 2007 he took 2nd place, succumbing only to the legendary US ultra-runner Scott Jurek;

He also ran through Poland from east to west, north to south, ran from Augustow in Poland to Greece, from Fatima in Portugal to Studzieniczna in Poland, and these are just some of his exploits!

In 2023, the heart of the world's ultracycling will be Poland!

All signs point to the fact that thanks to Race Around Poland, in July 2023 in Poland we will experience a true celebration of endurance sports. The possibility to watch live, and to follow online the progress of some of the most outstanding figures on the world ultra scene during their struggles in our country will be an unparalleled opportunity to popularise endurance sports in Poland and the whole region, and to popularise Poland as a country where the hearts of ultras can beat stronger!

Taking part in Race Around Poland in other categories, or at shorter distances, can also be an introduction to the adventure of endurance cycling with support. Who knows, maybe among the dozens of other participants who have already signed up for RAP there are future World Champions? We don't know, but we do know that registration is ongoing and there are so many distances and categories available that there should be something for everyone - including ambitious amateurs. Let's take part in an international ultracycling feast together!