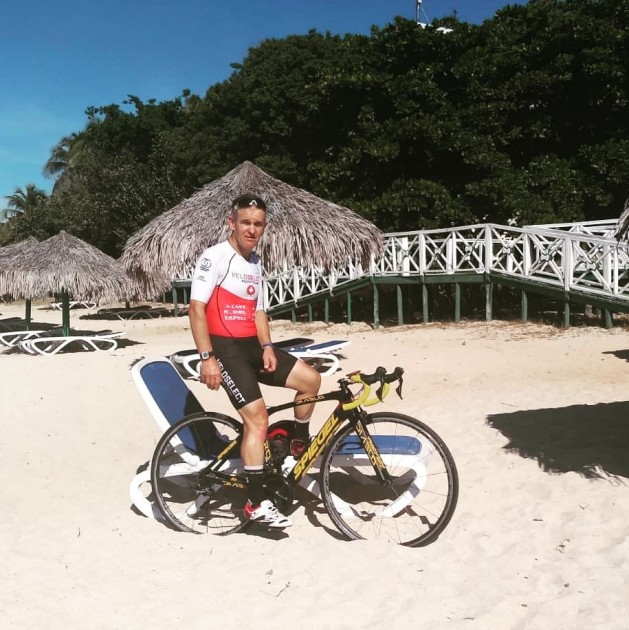 Sometimes in the beginning it is just the man and his will to compete. Take part in the competition and win. Overcoming rivals and winning laurels that no one has won before.

Sometimes it's coincidence at first. A brother who joined the cycling club earlier, the lack of an alternative to play another sport, or the desire to do compulsory military service without having to devote the best two years of young life to military training, and "fighting" with other riders in the colours of a military club instead. Just like Czesław Łukasiewicz, who comes from a tiny town of Korsze, squeezed somewhere between Poland's northern border with Russia (Kaliningrad Oblast) and Kętrzyn, Olympian from Sydney, an outstanding road cyclist, a member of the Quebec Cycling Hall of Fame, who as the only cyclist in history won the Canadian championship from a joint start four times, thus ensuring a permanent place in the history of this sport. He also took third place in the Tour de Pologne in 1987 (1st place in the points classification), and since the end of his professional career in 2001, he has successfully participated in Masters cycling races all over the world, regularly taking first places in his categories, and takes care of younger adepts of cycling.

And the bicycle - although the equipment itself does not win the race, you cannot forget about the bicycle!

Nevertheless, this story really has neither beginning nor end. After all, as the world is long and wide, from time immemorial, daredevils faced their own weaknesses and did things that seemed impossible for ordinary mortals. Since the rise of mankind, there have been those who wanted to see beyond the horizon or climb the highest mountain, or were unmatched in their disciplines. They were driven by curiosity, the desire to discover, competition and sometimes need. One thing is certain: they were an inspiration for others, and some in addition have gone down in legend, such as Filipides of Sparta or even Eddy the "Cannibal" Merckx...

What connects Nancy Guth - a 70-year-old lecturer from one of the best public universities in the United States, and Chris "Hoppo" Hopkinson - a 53yr old Gulf War Veteran, music teacher who lives on the island of Guernsey? Irish professional cyclist Joe Barr, who achieved his very first place in the race in 1986 and in 2019 became the winner of the WUCA World Cup in the 60-69 years category, winning countless awards and championships along the way, with a 30-year-old lawyer Kabir Rachure from Navi Mumbai, India, and Marko Baloh, 53 years old from Ljubljana, Slovenia, who has just become World Champion, in a 12 hour bike ride?

Nancy got on her bike when she was 50 years old and the time devoted to her PhD studies limited her ability to exercise in the gym. She joined her husband, an already strong cyclist, on Saturday's bike tours and discovered that she could ride long distances fast. It became so important to her that she postponed her PhD exam to finish a local race. Since then, she has been a multiple record holder of the time trial in the 24 hours category (High Mileage female - Michigan National 24 Hour Challenge), the best WUCA ultracyclist in the years 2002-2006 and 2008, the holder of Race Across America (RAAM) records in the women's team category 60 + (2011), and a record for a 60+ mixed team with her husband (2012), to name just a few of her achievements. Together with her husband, they created one of the most recognizable and successful ultra-teams in the world: "Beau and Babe"!

Chris smoked 20 cigarettes a day for 15 years and drank “like a fish” until he got on his bike at the age of 31 and started training. Since then, he has completed the RAAM four times, became world champion in 12- and 24-hour cycling, as well as in virtual cycling on the Zwift platform (2017).

"For me, age is just a red herring" Joe Barr told BBC after finishing RAAM in record time in 2019. In the end of an outstanding professional cycling career, he devoted himself to endurance racing after his son was diagnosed with cancer and he decided to help fundraising for the Royal Victoria Hospital in Belfast.

Until a few years ago, Kabir, a young lawyer from Mumbai, India, believed that people riding a few hundred kilometers by bike were crazy. In 2015, when he started his adventure with cycling, he was not able to climb the nearby mountains on the Mumbai-Pune road, today he became the third cyclist from India in history, who finished RAAM, earlier also winning, among others, Great Himalayan Ultra, taking place almost entirely above 3,000 meters above sea level. Considering his age, the greatest achievements are yet to come!

Marko Baloh felt that cycling was for him when, at the age of 17, he got on his bike and started to ride it. As he himself writes, it was "love at first sight" and the bike gave him confidence that he could not find elsewhere. The world of cycling became his world, a place where he could compete and win against the best, set records and win the World Championships. Ending a successful cycling career, he turned his eyes to the legendary RAAM, which seemed to be made for him. Since then, he has completed this race 8 times (!), Setting unbeaten records in his age category.

Different paths lead outstanding athletes to the top. Not all of them start at a young age, and extremely rarely, they are careers planned for ultra cycling from the very beginning. A career in ultra is often a coincidence, the journey we start by crossing the door sill of the house and getting on the bike, not knowing if we will come back infected with a dangerous bug - the love of ultra-cycling! This need to test the limits of your endurance, overcome them and achieve goals that would seem unattainable, and then overcome them again and set new, even more unusual ones, contradicting stereotypes and it would seem that insurmountable barriers (remember Hoppo cigarettes, or the age of Nancy when she started ?) is the common denominator of all these people. If you are curious about the way of Remigiusz Siudziński, the co-organizer of Race Around Poland - to the ultra-cycling Everest such as RAAM, be sure to read the series of articles "how to finish a really long race" that we have already published on these pages.

So these people share a common passion, but is it only?

There is something else!

You can look at a passion for a sports discipline from many points of view: as a sportsman, tables with results, and training plans, as a fan - searching with curiosity and searching for information on an interesting topic, or as a person responsible for preparing appropriate equipment - from attention by listening to the needs of the athletes and trying to turn them into the tools provided to them.

Here is another common denominator, because the Spiegel Bikes brand was also created out of love for endurance cycling. And all our heroes ride this company's bikes. Moreover, not only them, among the brand ambassadors and users we will also find Georgi Stoychev - winner of his age groups in Sebring 24 (410 miles) or National 12h Champion (2016) and many others.

Why on these bikes? Precisely because the brand's philosophy for over eleven years has been to prepare a product for them that will help them achieve outstanding sports results, taking away the concern for the comfort or durability of the bike and making them sure that they ride bikes that have been specially designed for what they do, by a company that specializes in it. The quality of the product is evidenced by the fact that in the 11 years of the brand's existence there has been no complaint about a defective frame!

The creators of Spiegel Bikes decided to combine the requirements of aerodynamics with the comfort required for long-distance riding, as a result, an uncompromising hybrid was created - a bicycle dedicated to fast and comfortable travel over ultra distances.

Big bicycle brands have different types of bikes in their palette, including endurance bikes where comfort comes with losses on aerodynamics, and time bikes, which have nothing to do with comfort and are not suitable for longer distances. Spiegel consistently focuses on the development of ultra-dedicated bikes and draws on the experience and input of the best ultra-cyclists in the world in their design. An experienced team of designers from Italy analyzes them and communicates the results of their work to German engineers who transform drawings inspired by real needs into production-ready matrices. As a result of the cooperation, super-light, constantly modernized frames of the following models were created: Diablo, San Marino, Tundra or Alpina, among which everyone will find something for themselves.

Among the many well-thought-out solutions, for example in the San Marino model, the chain stay determining the maneuverability has been lengthened, thanks to which the bike has a better distributed weight and is more confident and stable during descents at high speeds, which means a higher level of safety. In the Diablo model, the designers managed to achieve increased maneuverability, with high traction and comfortable geometry. According to Joe Barr, who assembled this frame with the Campagnolo hardware he has been using continuously since 1972 (!), this model is “Aggressive and lively. Descends beautifully at speed. Firmly in control of the ride while taking the sense of freedom to a new level.". Both models are light (the weighs are approx. 1000 grams) and aerodynamically profiled, as a result, both San Marino and Diablo will be perfect for normal road driving as well as for driving on the road. In fact, each of these models can be configured to be even more comfortable or aerodynamic depending on your needs. The lucky ones like Joe Barr, or Chris Hopkinson who have both: Diablo and San Marino at their disposal can further specialize them. According to "Hoppo", in his configuration, Diablo is "stiff, stable and responsive." Perfect for fast time trial ", and San Marino is" great for climbing and I have put it in a much more comfortable position ", although in fact how a particular model will be positioned is a matter of individual preferences.

Spiegel Bikes is consistently positioning itself at the forefront of global cycling brands providing products for ultra cyclists - for years it has been supporting the greatest events in the world of this discipline, including being a partner of Race Across America. As part of the collaboration with RAAM, a special painting pattern for the frame of the San Marino model has been developed, which can be owned by anyone who dreams about participating in it. The finishers of this race can order a bike in this painting personalized additionally by the time of finishing the race. It is a souvenir for life! Spiegel Bikes has also become a partner of Race Around Poland, and its organizers have also become the sole representative of the brand in Poland through its new brand – Spiegel Bikes Poland. The co-organizer of the race, Remigiusz Siudziński also became the ambassador of Spiegel Bikes and thus joined the group of titled ultra-cycling stars supported by this manufacturer. On the occasion of this cooperation, a special version of the San Marino model is also being created, the design of which will be shown soon. We plan that it will be available on the same basis as the version for the RAAM, and we also foresee the possibility of personalizing it with the data of the race finisher.

Is there anything else that connects the heroes of this story?

Of course it is - everyone has been invited to participate in Race Around Poland and we may see them in Poland in July! Wouldn't that be great? But don't tell anyone about it - it's a surprise!

RAP and Bike Expo together!