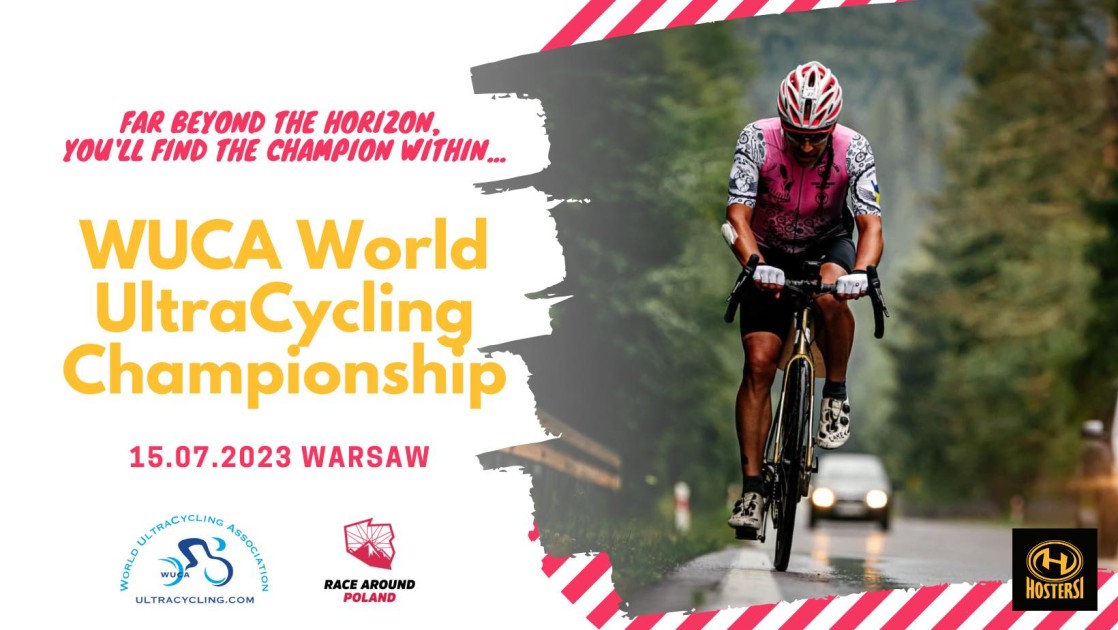 We are pleased to announce that the World UltraCycling Association (WUCA) has decided to award the right to organise the first World Ultracycling Championship to the Race Around Poland team!

The WUCA World UltraCycling Championships will be held during the third edition of Race Around Poland (RAP) 3,600 km for categories with support. Thus, apart from commemorative RAP finisher medals and statuettes, the overall winners, male & female will also receive official champion's jerseys and the titles of WUCA World Ultracycling Champions for 2023.

It is worth noting that this is the first event of the road cycling world championships rank to be held in Poland.

We are proud, because by awarding the organisation of the World Championship in Ultracycling to the Race Around Poland team, WUCA appreciated the high level of organisation of the event during the previous two editions. We are convinced that the upcoming third edition of RAP will provide long-distance cycling enthusiasts from all over the world with an unforgettable experience. We will do our best to ensure that it will also set a very high benchmark for future editions of the World Championships.

The World UltraCycling Association is the only global non-profit organisation for long-distance cyclists from all continents. Since its creation in 1980, it has been working for the development of ultra cycling worldwide. In North America and Europe, it organises continental championships every year. In addition to organising championships, it also certifies world records in long-distance cycling, and oversees the World Cup.

As WUCA wrote in its communiqué, the aim of organising the World Championships in Ultracycling in Poland is to introduce to the huge number of amateur ultracyclists from the entire region of Central and Eastern Europe the idea and spirit of support cycling racing, which is wildly popular in the world, as well as to show the global ultracycling community the wonderful Polish offer of routes and infrastructure for safe long-distance cycling and to encourage them to discover the unique natural and cultural values of these areas.

Cyclists from Slovenia, Latvia, the Czech Republic, the United Kingdom, Switzerland and Sweden have already competed on the RAP route, in various categories and distances, and the start list for the 2023 edition already includes riders from the USA and India. RAP is also the only race in Poland that allows participants to qualify for the Race Across America (RAAM), a legendary ultra cycling event held over a 4,800 km non-stop route from the west to the east coast of the USA. The qualification gained during the RAP has already been used by WUCA and Guinness World Record holder Arvis Sprude, and two participants in the 2022 edition have begun preparing to compete in RAAM in 2023. In addition to gaining qualification for the RAAM, race participants can also compete for points in the classification of the Polish Ultracup cup in ultra cycling.

In 2023, in addition to the 3,600 km distance at which the World Championships will be held, Race Around Poland will also be organised at shortened distances: ½ RAP, ¼ RAP and RAP Challenge 300 km, in categories with and without support, solo and in 2-person and 4-person relays. The event starts on 15 July 2023 in Warsaw, Poland. Registration is ongoing on the organiser's website: www.racearoundpoland.pl.