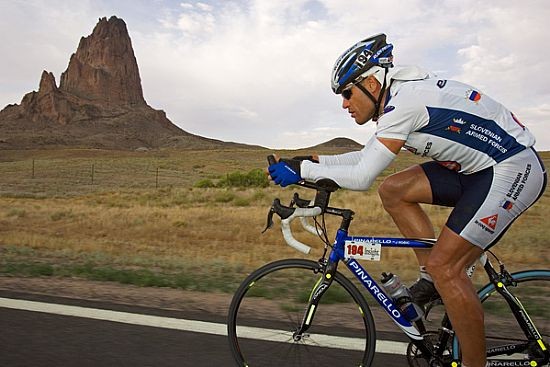 As the New York Times reported in 2006, he cycled around the globe every year. His daily training which included cycling, and other wortkout, lasted between 6 and 10 hours. He was one of the most accomplished ultra cyclists in history, winning the Race Across America five times and was the undisputed king of that race before Christoph Strasser took the baton from him.

His resistance to sleep deprivation and ability to push the limits of human endurance were the stuff of legends. Called "the machine" by some and "the Animal" by his friends from time to time, he would serve himself a 48-hour feat consisting of a 24-hour ride, a 12-hour break and a 12-hour workout without sleep.

On 24 September 2010 he was training on a mountain road in Plvavski Rovt, in his native Slovenia, and preparing to compete in the Crocodile Trophy in Australia, which was due to take place a month later. He died in a head-on collision with a truck and passed into legend.

On Saturday 10 April 2021, his friends, RAAM participants, fans and those for whom he was and continues to be an inspiration have decided to honour his memory by organising a 12-hour virtual rally - "RIDE FOR JURE ROBIC". The event will be broadcast on the OHIO RAAM Show, and will start with SAS Team and another prominent ultra cyclist - Chris "Hoppo" Hopkinson leading the first 100 km and starting in the morning GMT time. The event has already gathered riders from Europe (Slovenia, UK, Ireland, Poland, Germany, Italy) and from the USA, Canada, Australia India, Indonesia or Dubai. Details of the event can be found here: https://www.facebook.com/events/191713815800436

The Race Around Poland team and Spiegel Bikes Poland could not be missing among the organizers and participants - join us and ride with Jure!

RED BULL JOINS RACE AROUND POLAND AS A PARTNER!

RACE AROUND POLAND AND THE RACE LOGO AS A REGISTERED TRADEMARK!

Race Around Poland a qualifying race for Race Across America!