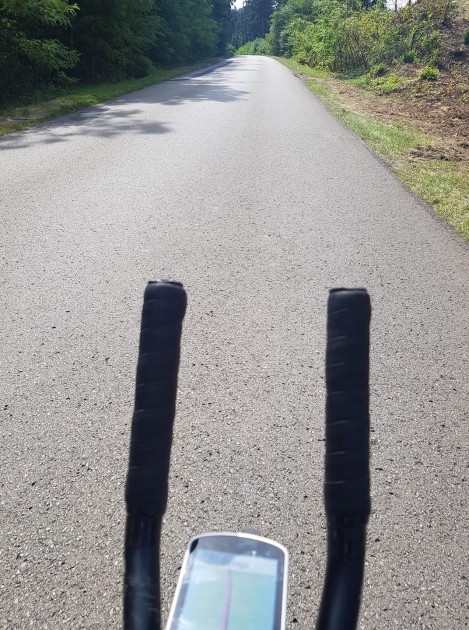 The first day ended after cycling 345 km in Hrubieszów around 10.30 p.m. The hotel where Remek stayed proved to be exceptionally friendly to the Ultracyclist. The possibility of bringing a bicycle into the room, the long-running kitchen and dry lunch issued after informing that the next day's start was scheduled at 4.30 a.m. made a positive impression.

We are collecting such gems for you - we will indicate this place in a more detailed report from the tour on the website.

After 4.5 hours of sleep the second day started at 4.50 a.m. (5 degrees Celsius!), when Remek started to go in the direction of Bieszczady.

The first report arrived from Tomaszów Lubelski around 8.30 a.m. - a short stop and a meal at the petrol station. A warm drink. From the vicinity of Nowe Groble (Podkarpackie) Remek wrote around 1.30 p.m.: "Asphalt like a table. No traffic." (see photo).

Then Remek headed for the most difficult part of today's route, the ascent to Arłamów, which he reached around 5.30 p.m. The day will end in Lutowiska, to which he is just coming to a well-deserved rest. The Bieszczady Mountains achieved according to plan!